Toronto is a beautiful city, with diverse characteristics that make it a unique place in the world. That is why today we want to show you some curiosities of the capital of Ontario, 35 fun facts about Toronto that will make you never forget this magnificent city. So, get ready to be surprised…

1) Although Toronto may not seem to be a giant city, with an area of 691 km it is the largest city in Canada and the fifth largest in North America.

2) Toronto is known as the financial capital of Canada, it is home to a significant number of companies from various sectors including tourism, film, finance and telecommunications.

3) A city with an impressive economic contribution, the Toronto Stock Exchange is the seventh largest stock exchange in the world and the largest in Canada.

4) Toronto is home to one of the tallest buildings in the world. Known as the National Tower of Canada or CN Tower, has a total height of 553.33 meters, which is why it appears in the Guinness Book of Records. 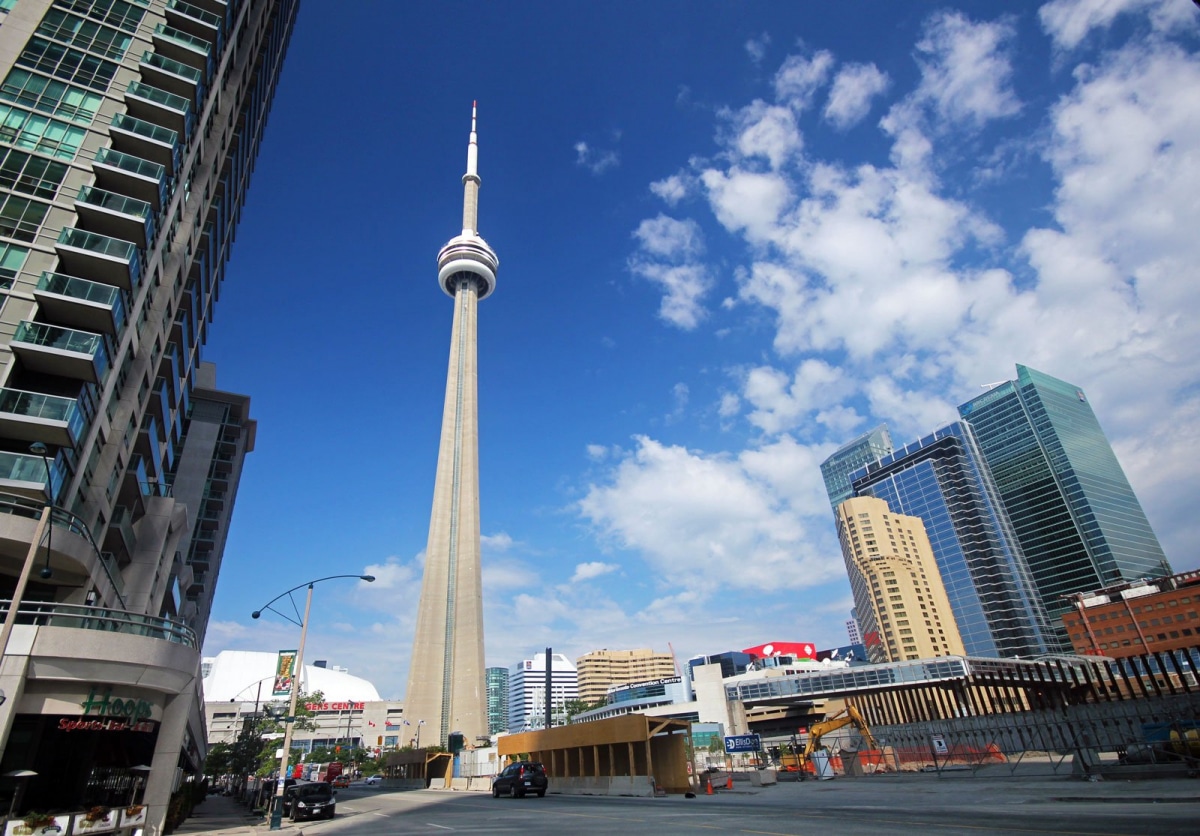 5) The CN Tower is more than 40 years old, it was built in 1976 by Canadian National Railways and its construction cost was 63 million dollars.

6) Thanks to its 360-degree view and its location, right in Toronto’s financial center, it allows its visitors to see Lake Ontario and other very important and impressive buildings in the city.

7) The Edgewalk of CN Tower was recognized by the Guinness Book of Records as the World’s Highest Outdoor Walk. An attraction not suitable for the heart.

8) A very charming fact about CN Tower is that inside it keeps a “Time Capsule” made in 1976 with letters from primary school children, copies of three newspapers and a letter from former Prime Minister Pierre Elliot Trudeau. The “Time Capsule” will be opened in 2076, when the tower turns 100.

9) The capital of Ontario is a multicultural city, as evidenced by the fact that some 140 languages other than French and English are spoken in Toronto. In addition, more than half the population was born outside of Canada.

10) The construction of the CN Tower took 40 months and was the tallest tower in the world until 2010 before the Burj Khalifa tower in Dubai was built.

11) Every October 31st, a zombie parade is held in the city of Toronto, which brings together more than 5,000 people each year, making it one of the largest zombie marches in the world. 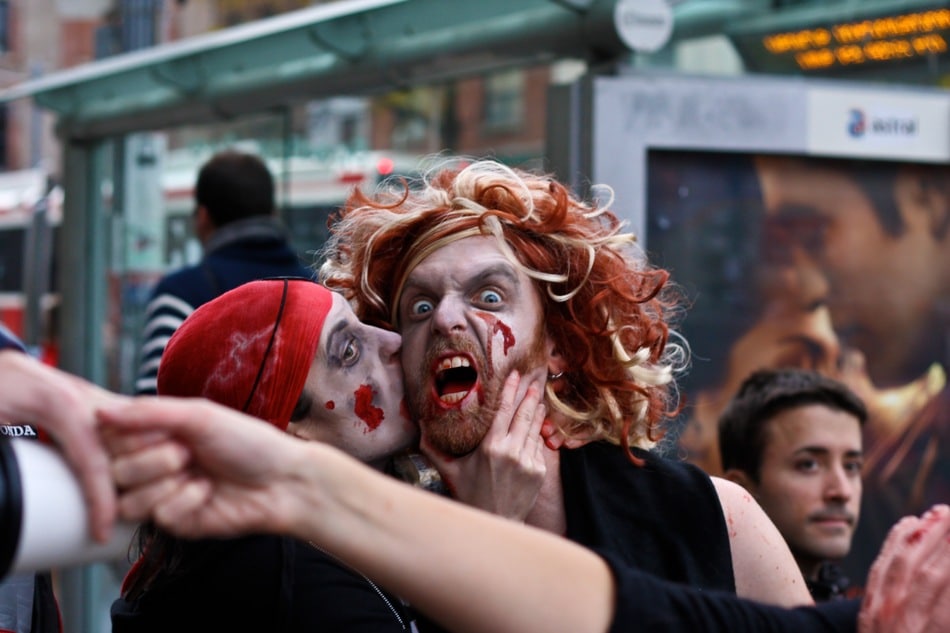 12) An impressive fact about Toronto is that it has the largest underground pedestrian system (The PATH) in North America, where you can find more than 1,200 restaurants, shops, offices and several subway stations.

13) Toronto is home to Jim Carrey, Mike Myers, Donald Sutherland, William Arnett and more. Ontario’s capital is home to a quarter of the films produced in Hollywood each year, so much so that it is now known as Hollywood North.

15) In August 2011, one of the most extreme attractions you can find in Toronto was inaugurated at CN Tower. The famous Edgewalk, is an outdoor walk at 365 meters high outdoors and it takes 30 minutes to complete it.

16) In Toronto, Catholicism is the most widely practiced religion, followed by Orthodox Christianity, Islam, Hinduism, Judaism and Buddhism.

Read: What to see and do in Toronto

17) This fact is very curious, although the official language in Toronto is English, the second most spoken language in the city is Italian.

18) One of the most popular neighborhoods of Toronto is Distillery District, there you can see hundreds of Victorian houses that have lasted over time. This neighborhood is one of the artistic areas of the city and is preferred by hipsters for its wide cultural sample.

19) In addition to being recognized as the economic capital of Canada, also known as one of the most important port centers in North America.

20) The total area of the CN Tower is 27.84 square meters with glass floor, installed in 1994 and has a 360-degree view. Visitors to the tower have the feeling of being suspended in the air.

21) A sad reality is that due to the high cost of housing and rent, more and more homeless streets are being seen in Toronto.

22) A very curious fact about Toronto, the most requested dishes by tourists visiting the capital of Ontario are deer and salmon.

23) The Toronto Film Festival is one of the largest film festivals in the world, with more than 300 films screened during the 10 days of the festival.

24) Gastronomy is very important in the Capital of Ontario, as there are more than 8,100 restaurants in Toronto

25) Hanlan’s Point Stadium was the place where Babe Ruth made his first professional home run for the first time.

26) Toronto is a tourist city, as evidenced by the fact that every year it receives more than 40 million visitors. 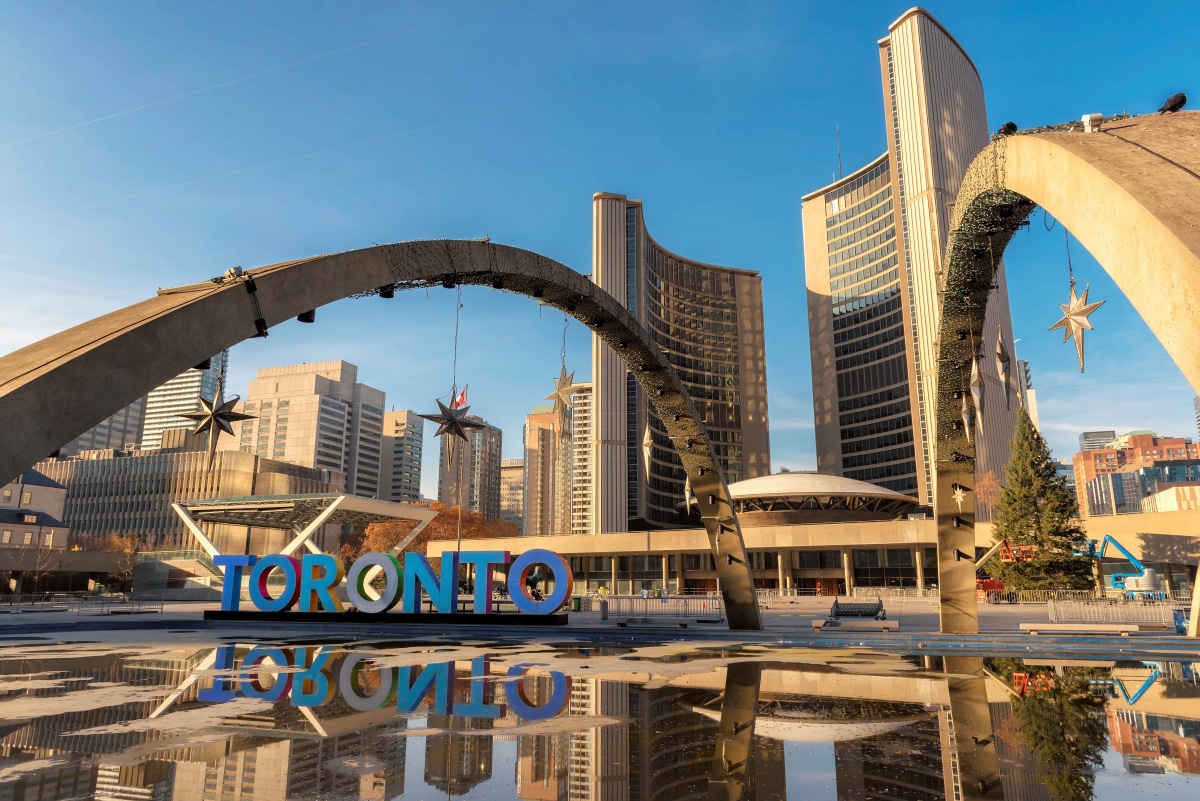 27) According to information from the Toronto Tourist Office, CN Tower receives more than 1 million international visitors each year.

28) The capital of Ontario has the largest zoo in Canada. The Toronto Zoo is home to more than 16,000 animals of 491 different species.

29) Toronto’s Casa Loma is the only truly authentic castle in North America.

30) According to the Guinness Book of Records, Yonge Street, 1,896 kilometers long, is the longest street in the world.

31) As a tourist city, Toronto has more than 3,500 hotels that receive more than 7 million tourists each year.

32) In addition to be a tourist city, the capital of Ontario is an artistic city, where more than 23,000 artists reside.

33) The Toronto Islands is the largest urban car-free community in North America.

35) Around 200,000 people pass through Union Station on standard business days.