The 1000 Islands form an archipelago made up of 1700 small islands which are one of the most spectacular attractions on the planet. The islands are divided by the border between the United States and Canada, the Canadian islands are in the province of Ontario and the islands of the United States in the state of New York, the 1000 Islands are in the final stretch of the St. Lawrence River, next to the mouth in Lake Ontario.

So, join us on this adventure and find out what to do in 1000 Islands. Let’s get started!

On this island you can see a fairytale fort, the Boldt Castle, built as a gift of love. George Boldt, manager of the Waldorf-Astoria Hotel in New York City and who along with his family were regular visitors to the Thousand Islands, decided to give his wife Louise a castle as a gift.

In 1900 began the construction of this ambitious project, more than 300 workers were involved in this great work of 6 floors, 120 rooms, 5 Italian gardens, power plant, drawbridge, secret passageways, dovecote and a tower intended for children of the family. The castle was to be finished in 1905 in February, as the date for giving the gift was Valentine’s Day, unfortunately Louise, George Boldt’s wife dies a year earlier.

The construction of Boldt Castle ceased in early 1904 after the death of Boldt’s wife and he never returned to the island again, this made the castle structures exposed to vandals and the harshness of winter. Sometime later the authorities of the 1000 Islands acquired Heart Island for $1 and signed an agreement in which all the income obtained with the castle would be applied in its restoration, thus Boldt Castle was recovered and is now one of the great attractions of the Thousand Islands.

Read: What to see and do in Toronto

This island is one of the most particular of 1000 Islands as it is the only island, of the 1800 islets, which is completely artificial. Another of the greatest peculiarities of Long Vue Island is that it has had dozens of owners and each one has given it a special touch, adorning it with different objects. One myth that surrounds this island is that you can see ghosts walking around at night, others say that the spirit of Lewis Dollinger, a former owner of the island guards the place and is who you see walking around the island when the sun goes down. 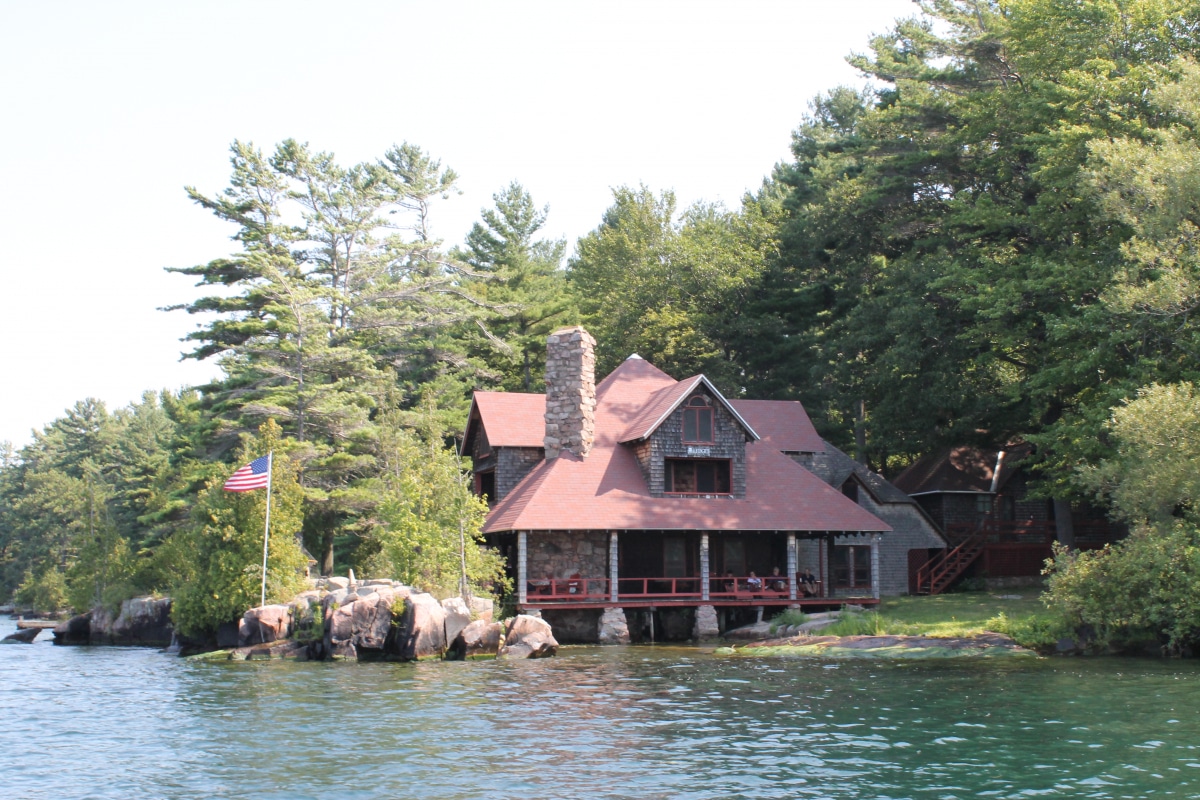 This island as well as Heart Island has a wonderful history. Deer Island was purchased by the Rusell Trust Association for the purpose of becoming a retreat for Yale University’s famous secret society, Skulls and Bones. In the golden age of this island you could see great golf courses, a varied and beautiful vegetation, tennis courts and a gigantic summer cabin, now you can only see how the wild vegetation took over the place, leaving only a space for the cabin. This island that had as purpose to be a place to meet with the old university friends now is going down, a sad fact because despite the ruins you can see that it was a very beautiful place.

Stories of ghosts and wild spirits that roam the island are also told. At one time some tourists went on night excursions to live a paranormal experience. The island is now guarded and disembarkation is not allowed. 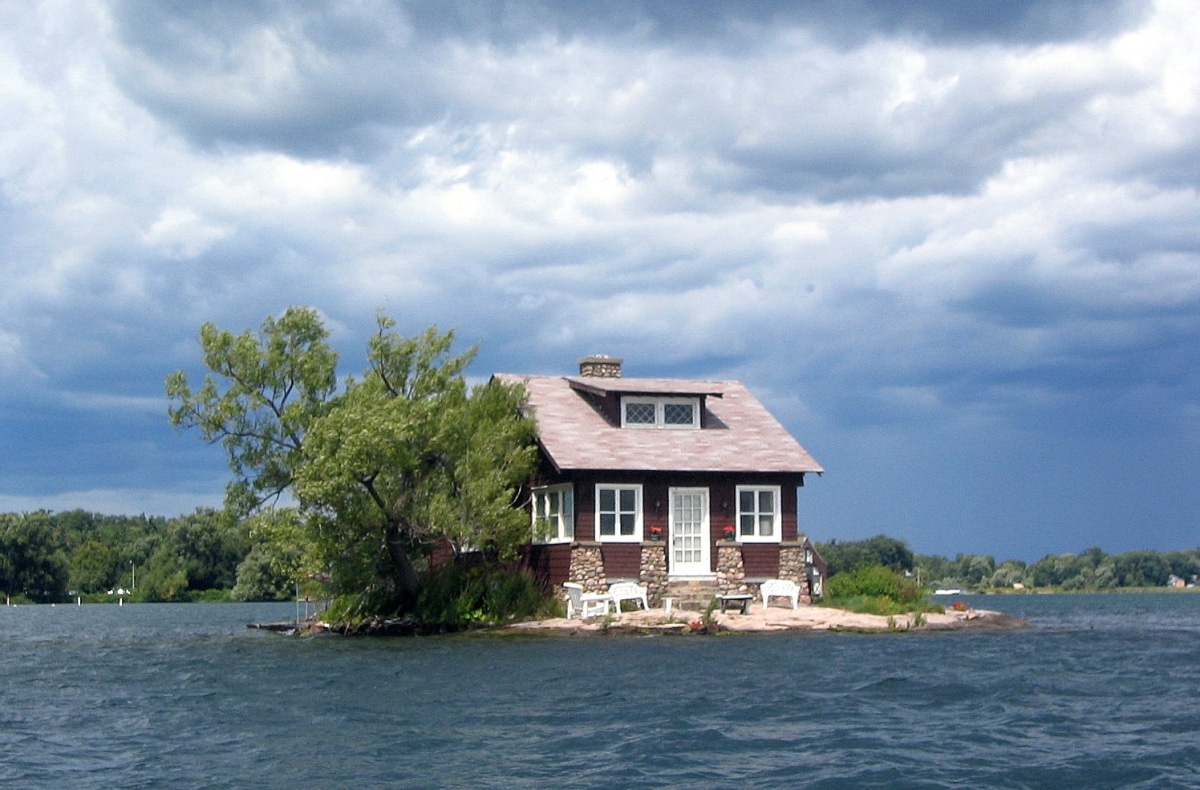 Perhaps this is one of the most charming islands of the 1000 Islands and is that this little piece of land is inhabited by a one-bedroom house, that’s right, a single room is enough to live comfortably in this earthly paradise known as 1000 Islands. In addition to the one-bedroom house there is a tree that accompanies it, as one of the conditions for building on one of these islands is to plant a tree, as this small house fulfills that condition.

Living in this house can be quite a challenge, there you will forget about luxuries and large spaces. Another fascinating detail of the 1000 Islands is to see its great variety, imagine after seeing the Boldt Castle you find it is miniature construction. Amazing!

We left behind one of the smallest islands of Thousand Islands to now talk about one of the largest. Wolfe Island is approximately 29 kilometers long and is home to 1400 people, this can vary in summer, when the island is full of tourists.  One of the great attractions of this island are its bicycle lanes that cross all the terrain, being to cross the island in bicycle one of the most usual plans of Wolfe Island. 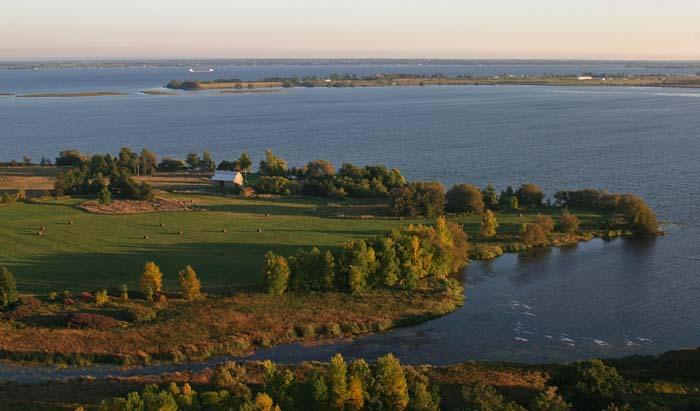 Another great attraction of the island is the Church of the Sacred Heart of Mary, this church is the largest in 1000 Island, on the other hand, this island has a great fauna, is home to thousands of birds and is visited by swans in spring, without doubt Wolfe Island is one of the most prominent islands of 1000 Island.