WHERE TO BUY VIDEOGAMES IN NYC

Home/Blog/WHERE TO BUY VIDEOGAMES IN NYC

New York, a fascinating, charming city, a city of skyscrapers, bridges, nightlife and with… WONDERFUL VIDEOGAME STORES! Yes, that’s right, the Big Apple is one of the best cities there is to buy video games, consoles or any item that has to do with one of the largest industries in the world, the video game industry.

Gotham is almost like a paradise for Gamers, there, in the City That Never Sleeps there are excellent video game stores, many, you could spend an entire year trying to tour them all and so that does not happen, then you can see a selection, rather a guide with the 3 best video game stores in New York City.

Nintendo will always be one of the most spectacular stores you can visit in New York City. It doesn’t matter if you are a Videogame fan or not, but this store is a must-see in the Big Apple. New York’s Nintendo World Store, located at Rockefeller Plaza, has long been an iconic place to buy video games, consoles, merchandising items and much more from the Nintendo world in New York. 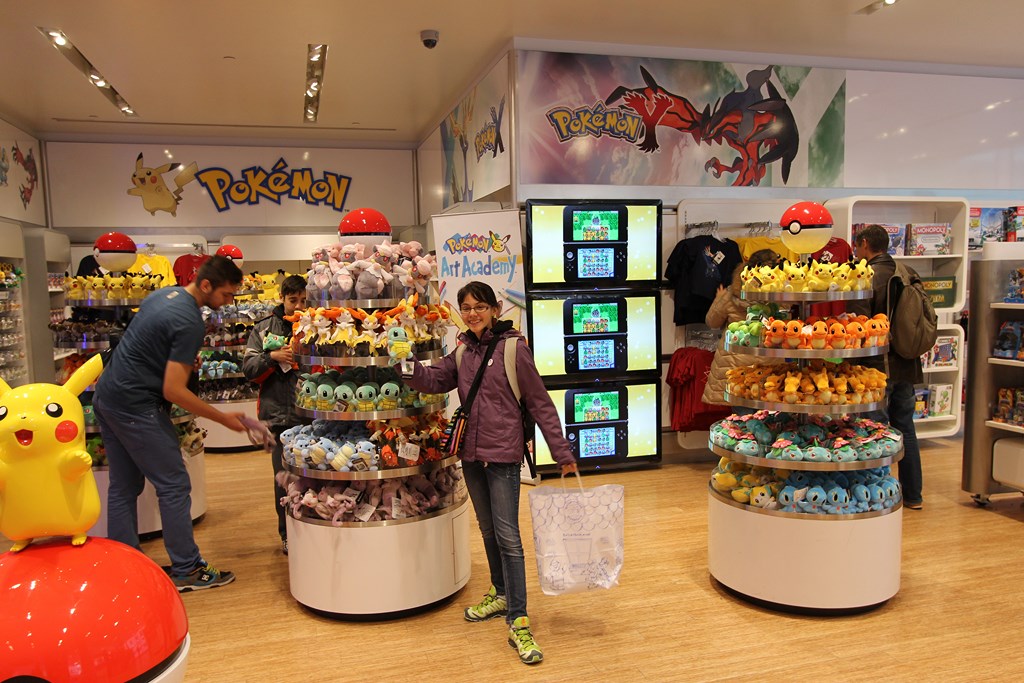 The shop is unmistakable, has two floors with a huge glass facade adorned with blue tones. On the first floor you will find video games for all their consoles, especially for the Wii U and Nintendo Switch, there you can also see plenty of merchandising of their most famous character, Mario Bros, and Pokemon, Zelda, Donkey Kong, Kirby Superstar.

The second floor of the Nintendo World Store is SURPRISING!… there is a huge collection of classic consoles and video games that will fascinate you and take you back to your childhood when you spent hours and hours playing Super Mario Bros.

In addition to the consoles on the second floor you can see a space dedicated to Zelda. There are merchandising of all kinds, videogames, special editions of collection, you will also find more videogames of Zelda and other Nintendo characters. A very interesting space for fans of the Zelda saga.

A store highly recommended for any fan of video games. The most interesting of the store are the collections of retro consoles, the Zelda section and its Gameboy burned during a bombardment in the Gulf War and that still works today.

This store is a New York City classic if you look for retro in the city. Videogames New York is always reviewed as the best retro video game store in the Big Apple and it certainly is likely to be, this store is on another level.

The shop is located in the interesting district of East Village, in the borough of Manhattan. Its entrance is an invitation to discover paradise for any videogame enthusiast, especially retro videogames. 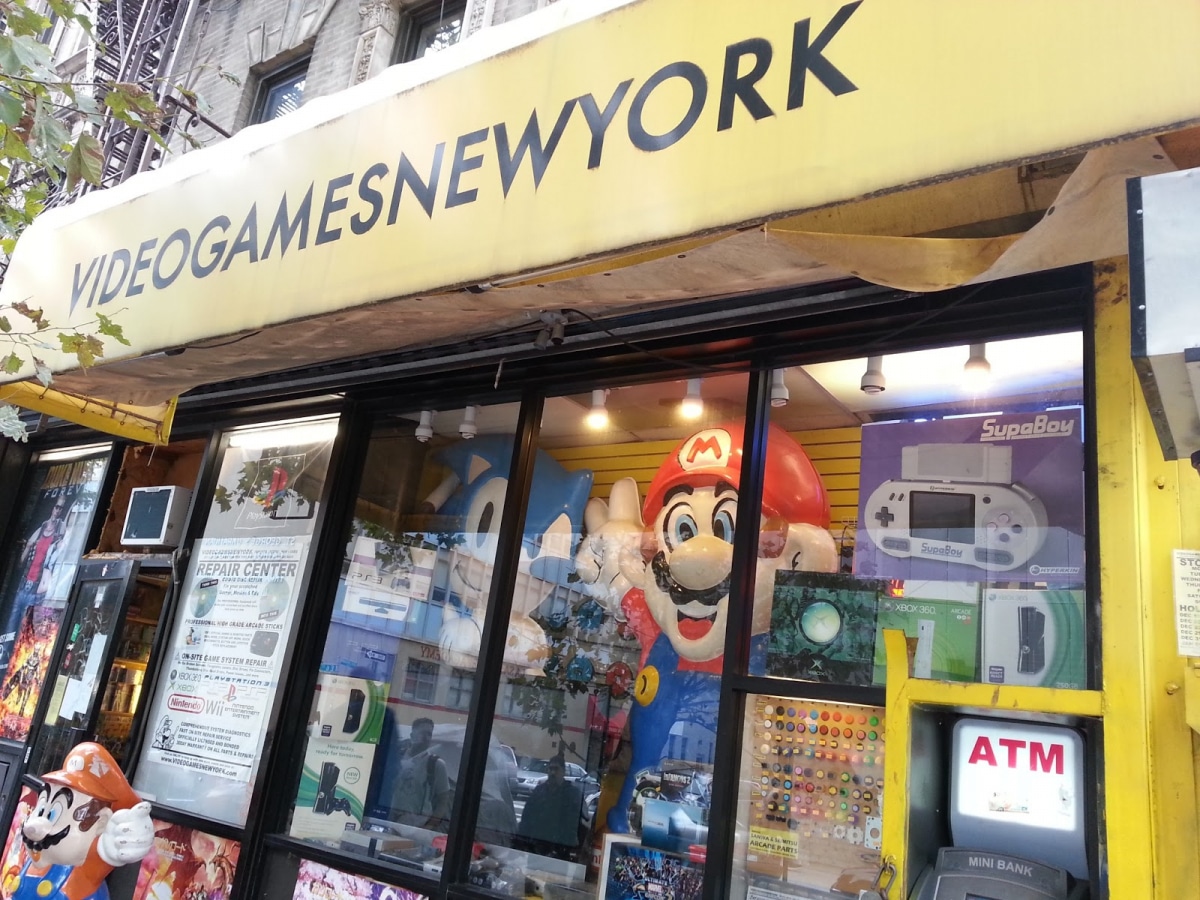 The aisles and showcases of the store are full of games, literally there are games from the floor to the ceiling. This store has everything, its collection of video games is huge, not only focused on one console but on all that exist or have existed in the market. Regarding consoles, the store has an Atari 2600 with a wooden front, a relic of the video game industry. It is worth mentioning that the store also sells current video games and consoles.

Undoubtedly a must visit store in New York if you are fond of video games in general and retro. The prices of the store are within the average and you can also buy online at the official site of Videogames New York, the stock of his page is just as great as the store.

A great store has a great selection of games from the 90’s to the present day, controls of different consoles and many collectible action figures. J&L Game is spectacular, something very remarkable about the store is the way it is organized, the whole store is divided by aisles and each aisle corresponds to a specific brand, meaning that there you will see Play Station aisle, Nintendo aisle, Xbox aisle, and so on.

The number of video games in the store is impressive, its shelves are full of games, so if you are looking for something in particular you should go straight to J&L Game. Its façade isn’t as attractive as other video game stores, but you only need to go inside to understand the magnitude of the store and why it is been listed as one of the best video game stores in New York City. 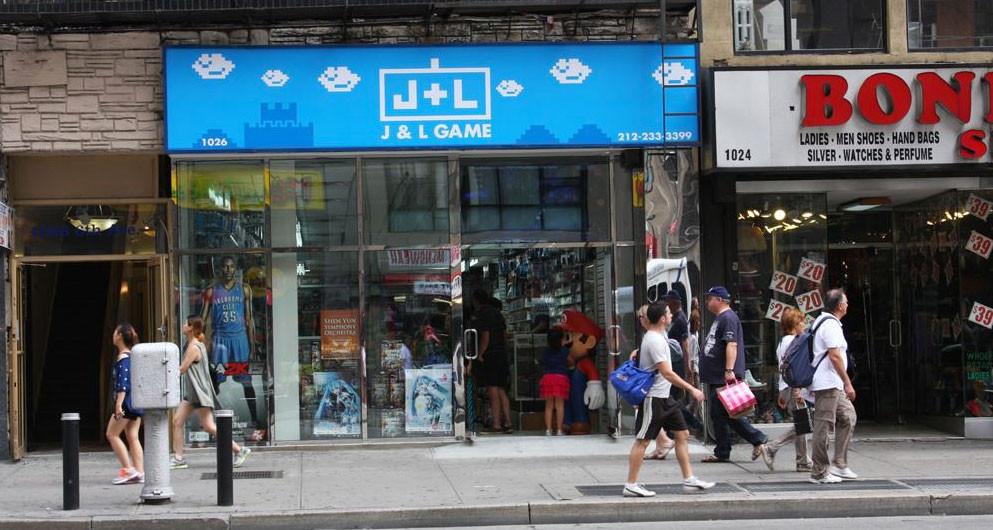 Something that you will like very much are their prices, they are reasonable and if you compare them with other video game stores in the Big Apple you will notice that in J&L Games many times are below the regular price. Another great thing about this store is its staff, the people who work there have extensive knowledge about consoles and video games, making your purchase easier, also is great to engage in a conversation with some of them, you will learn a lot from this great industry.

You will love this store, it is full of things that all Gamer wants, do not hesitate to go to J&L Games one of the best videogames store in NYC.  You can also buy in the store via online, there you will also find a great catalog of games all very well separated by categories.

This store is a classic of New York, is a chain of video game stores where you will find hundreds of new or second-hand items at an excellent price. This store is at the forefront and always has the latest developments in the video game industry, thus becoming a store you should visit when you are in New York City.