Toronto is a city full of life and every neighborhood has hundreds of things to offer, every area of the city has a unique vibe, so if you want to explore the best of this fascinating metropolis we recommend you take a look at this list with 5 of the best neighborhoods in Toronto, each of them tourist areas that you should visit if you are hiking in Toronto.

Embark on this wonderful journey and fall in love with Toronto.

Old Town is one of the most vibrant places you will find in the amazing city of Toronto, there you will see a great contrast, how modern Toronto is now in other areas and how they have managed to preserve their history over the years, something fantastic that will remind you of the beginnings of this wonderful city. Old Town is part of Downtown Toronto.

In addition to Victorian-style homes and old buildings, you’ll find one of Toronto’s best dining destinations, the renowned St. Lawrence Market named by National Geographic as the best market in the world. Did you know that St. Lawrence Market was built in 1802? This great market offers you the possibility to find a great variety of products, from fruits, vegetables, cheeses, wines to clothes, crafts, jewels, souvenirs and many other things.  St. Lawrence Market is one of the tourist places par excellence. 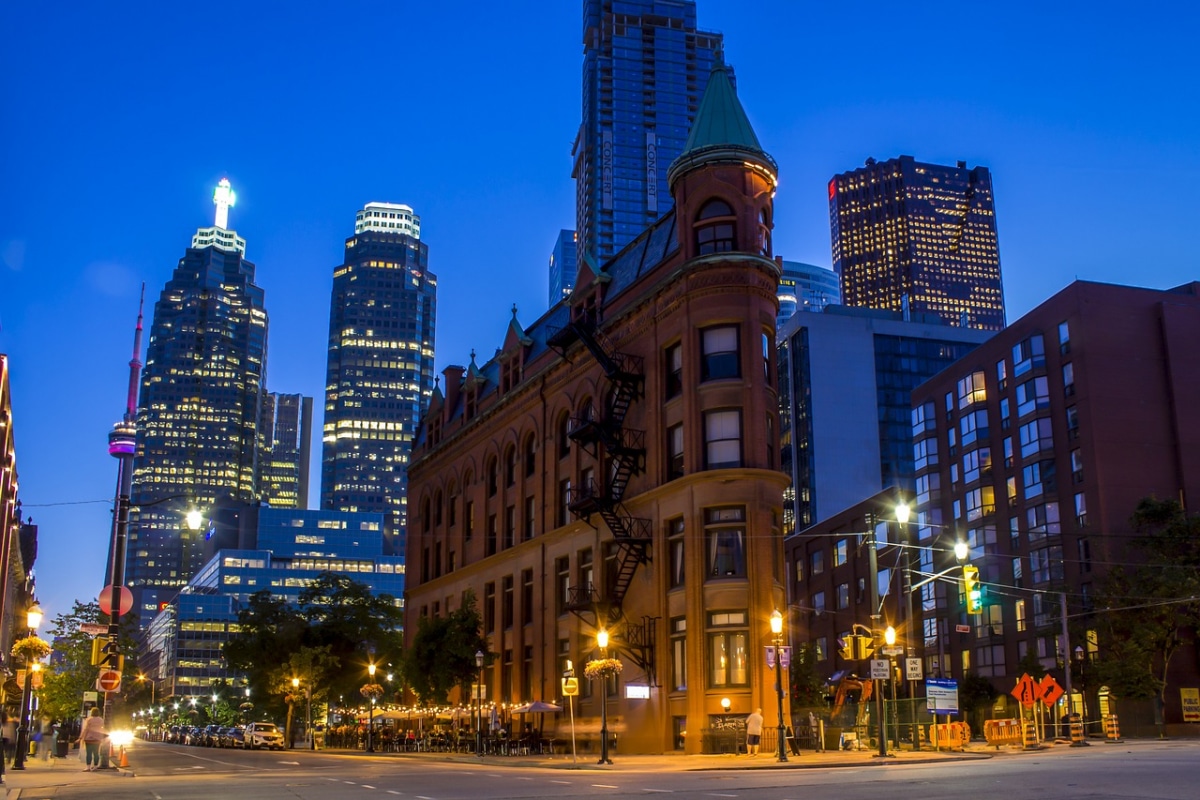 Just a few steps from St. Lawrence Market is another of Toronto’s most emblematic areas, the Distillery district, an area of the city very famous among tourists. At first this place was a whisky distillery, one of the largest in North America, but over time became one of the most picturesque areas of Toronto, a place very well preserved for locals and tourists to have fun, and is that in Distillery District has a dozen activities that you will love.

Distillery District offers you an amazing journey back in time, once there you’ll feel like you’ve traveled back in time as Victorian architecture, predominant throughout the old Toronto area, makes you feel like you’re in the past. Another great attraction of this part of the city are its pubs, Mill St. Brewery being the most famous of all.  In summer, this part of Toronto is home to many events, plus the area’s Rooftops open their doors so people can enjoy the hottest time of the year while admiring the city from above.

Nearby is the Hockey Hall of Fame, another place you should visit if you’re on a Toronto tour.

Read: Where to eat, drink and shop in Toronto

For a while Yonge Street held the title of being the longest street in the world, with more than 1000 kilometers long is another neighborhood you should visit if you are touring Toronto. What can you find in Yonge Street? This street is the most important street in Toronto, it runs through the city from north to south, so the chances of finding something to do are endless.

This street will allow you to visit Dundas Square, one of the most touristic areas of Toronto and key point of the city. This part of the city is a large square surrounded by some of Toronto’s most imposing skyscrapers, characterized by their large facades and giant advertisements, very New York Times Square style.

Around Dundas Square are also located some of the most famous shops in the world, as well as the famous Eaton Centre, the most emblematic shopping center of the city, where you will find the main fashion and technology chains, it is also a very modern place where you will find hundreds of great restaurants, one thing you should keep in mind is that for its fame thousands of people visit daily, so walking inside the mall can often be a challenge.

Once a neighborhood largely inhabited by hippies, it is now one of the most fashionable places in the city of Toronto. Today it is known as the fashion district, often referred to as “The Mink Mile”, there, in this mile you will find famous designer shops and you can buy famous brands such as Marc Jacobs, Channel, Louis Vuitton, Carolina Herrera and many other haute couture brands. Besides the shops, this area of the city is also full of incredible restaurants, such as Blu Ristorante, Sassafras and the famous Italian restaurant Blu Ristorante.

Next to Yorkville is the Annex, in this neighborhood is the campus of the University of Toronto and unlike Yorkville, is a neighborhood where you breathe the university atmosphere through each of its streets. The style of Annex is an uncomplicated style, its streets are full of bars, restaurants, galleries, cafes, vintages stores and dozens of great bookstores. During the summer months the neighborhood is full of life, it becomes a place where young people will have fun in the bars and rooftop area. This area of Toronto is a wonder, it is worth visiting, especially when it is summer, a place that will make you feel alive, with lots of energy, a very cool place.

This neighborhood of Toronto makes you feel as if you were in another city, this area of the city will allow you to get into the fantastic Asian culture and enjoy its cuisine, culture, Asian art and thousands of other things. Chinatown is impressive, it makes you feel different, this Toronto neighborhood has a very special energy that reminds you how important multiculturalism is in the fascinating city of Toronto.

Just a few blocks from Chinatown, is located another of the most charming neighborhoods in Toronto, that neighborhood is Kensington Market, a bohemian neighborhood full of independent shops, galleries, bakeries and boutiques. This area of the city breathes art, in each street you can see hundreds of locals and tourists amazed by the large amount of independent art that exists in this area of Toronto. On the other hand, in Kensington Market you can see at first sight the perfect cohesion between immigrants from the Caribbean, Europeans and Latin Americans, is impressive as there are so many cultures in the same space.

When you’re touring Kensington Market remember to visit the Ontario Art Gallery, a great place that houses more than 90,000 works of art, a museum where you can see works by artists like Picasso, Rembrandt and Goya.