THE 10 TOP BOSTON’S STATUES TO VISIT

Boston is a beautiful city that has awesome places that many times the tourists let pass and not visit. But with this guide, the way you travel around the city will change your life because you can discover the hidden treasures that Boston has for the visitors. 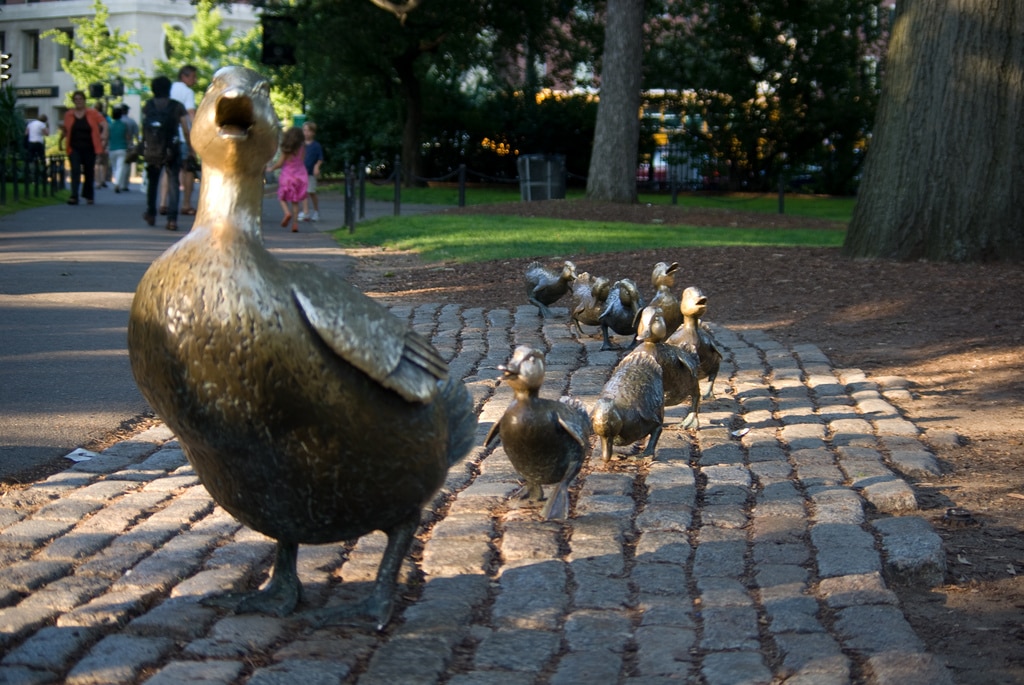 To visit this statue is a must during your stay in Boston. This sculpture made in bronze is a recreation of the book the Make Way for Ducklings, written by Robert McCloskey.  This statue is one of the fav landmarks in Boston and one of the most loved by the locals. There you will take photos the duck Mama and her cute little ducks chasing her in a row. The statue is located at Boston Public Garden and is very easy to find it.

This statue pay tribute to one of the most emblematic writers in the modern literature.  The 5-foot 8-inch sculpture designed by sculptor Stefanie Rocknak shows a determined Edgar Allan Poe, who is being beaten by the wind in his chest and from his briefcase comes papers and a crow. The statue of Edgar Allan Poe is spectacular, from the first moment you see it catches you and when you stand up to it you will immediately feel the aura of the mysterious writer.

The sculpture is located at the intersection of Boylston Street and Charles Street. 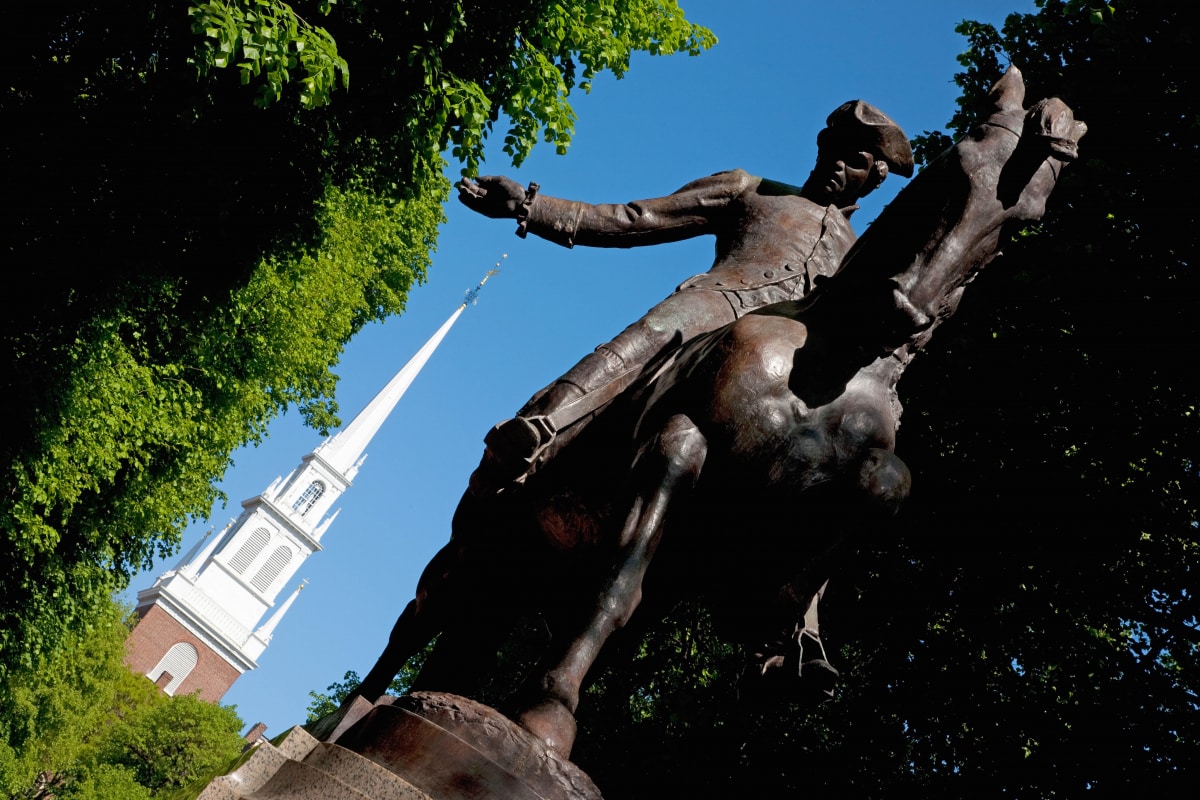 This sculpture is a representative postcard of Boston, Paul Revere is a legendary character in the United States history and for this is a very spot visited by the tourists. The statue was made by the sculptor Cyrus Dallin and is located at Hanover Street, right off the Freedom Trail.  This bronze statue shows a Paul Revere victorious, fighting for the civil rights, a man committed with the freedom. 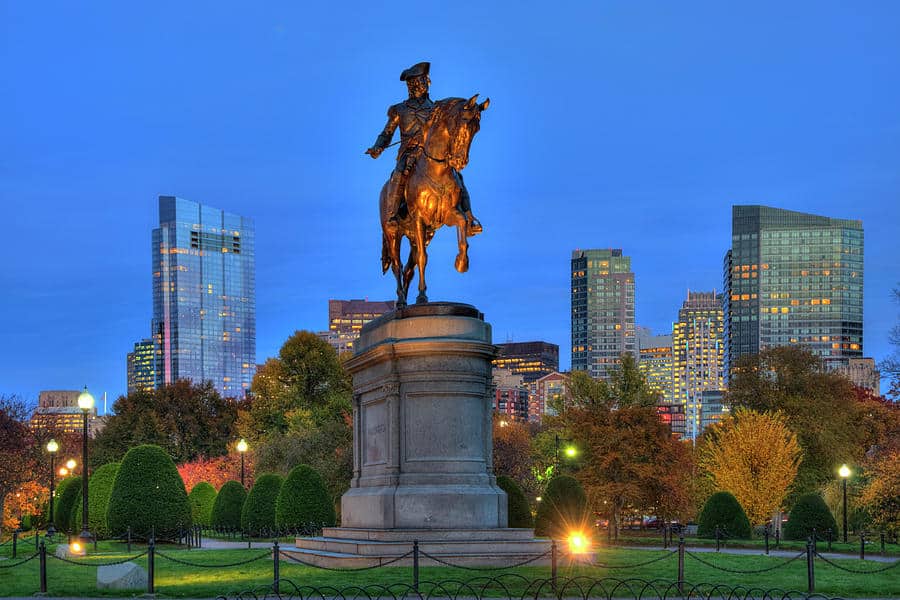 A statue that perfectly represents the spirit and life of George Washington. It is made entirely of bronze and is one of the largest in the city, was made in 1864 by sculptor Thomas Ball and is one of the most visited and photographed by tourists. Without a doubt to go to contemplate this sculpture is wonderful, if you are a lover of American history you can spend hours looking at the statue and if you are not you must go to see it, you will really be surprised. The statue is located at Boston Public Garden. 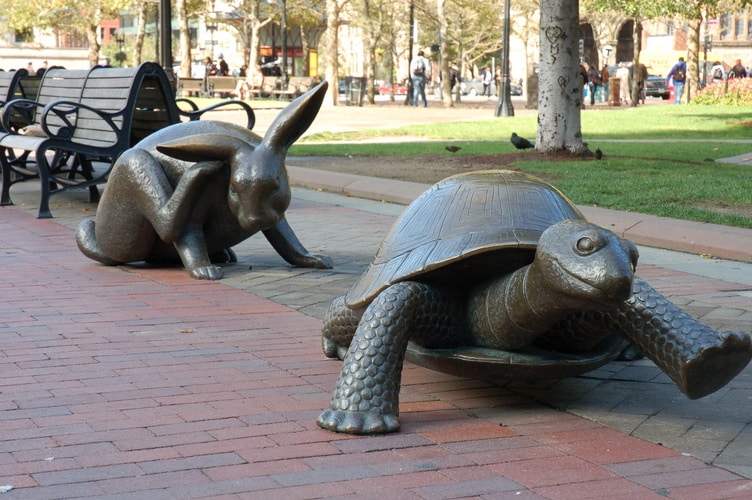 It is a charming sculpture, which you will always want to photograph, and it is that these two animals represent one of the most famous stories in the world, the Turtle, and the Hare. It was made by local artist Nancy Schön and pays tribute to all those who run the Boston Marathon. The statue is in Copley Square, right next to the square and is a great place to sit, hang out and take a break. You will love this statue and it will probably become one of your favorite places in Boston. 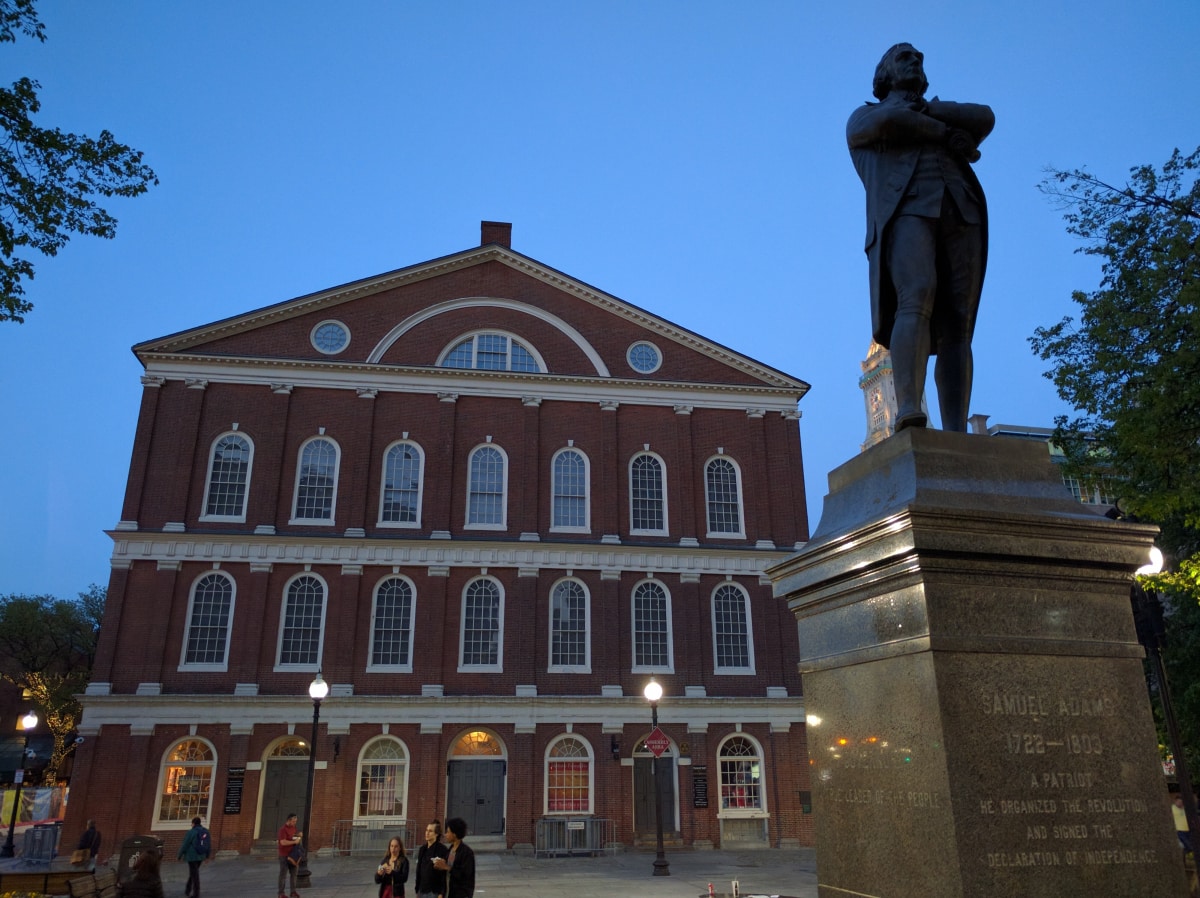 Made by sculptor Anne Whitney in 1875 and inaugurated in 1880, it is one of the most representative statues of Boston. Located in Faneuil Hall Square, it is a sculpture that pays tribute to one of the founding fathers of the United States. The sculpture shows an imposing Samuel Adams, with his gaze directed towards the horizon dreaming of a new country. This sculpture is one of the most photographed in Boston, usually, there are many people around it but it is worth visiting as it is a landmark of the city. 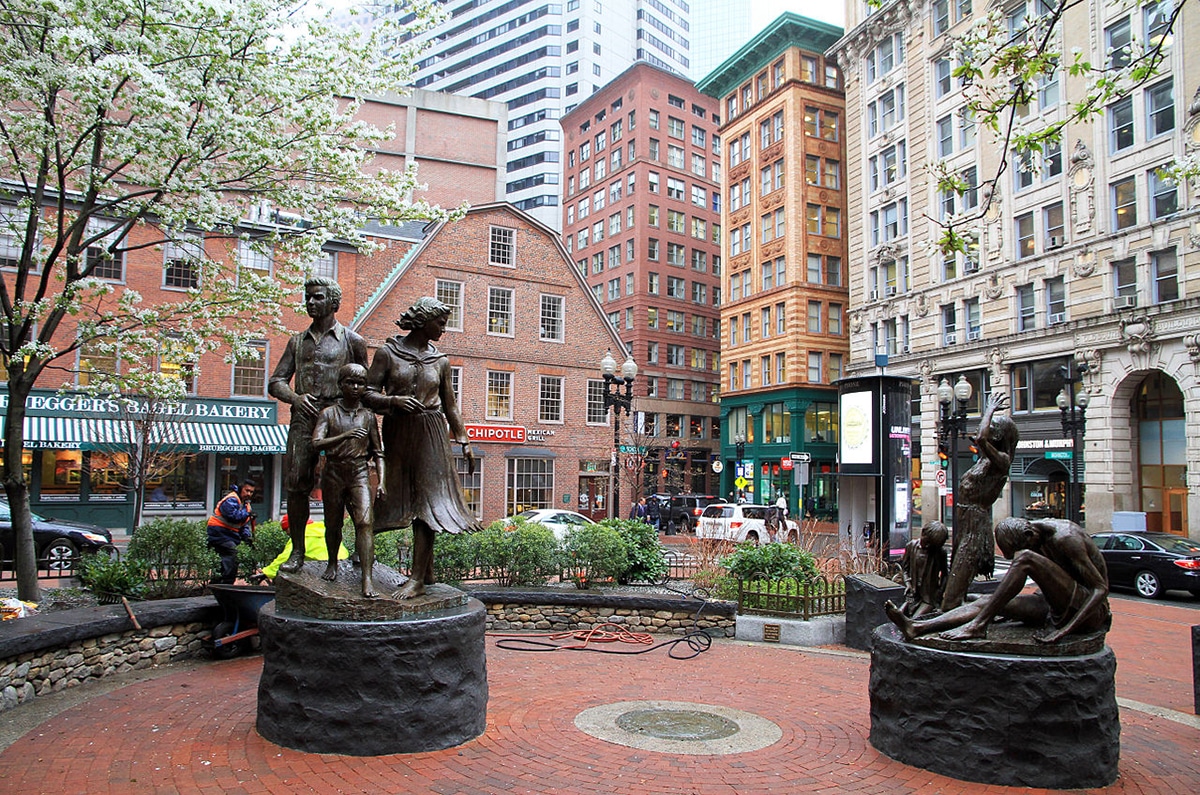 This memorial commemorates one of the saddest disasters of the 19th century, The Great Famine or “An Gortha Mor“, a wind-spread rust that destroyed all potato crops in Ireland and killed two million people. This monument is a place to reflect, there you will see some very real statues that will touch your heart.  The statues are located on the Freedom Trail and are a great attraction for tourists, it is inevitable to pass by them and not stop to observe them. Take your time when you are in front of it, so you can understand the meaning of this famine in history. 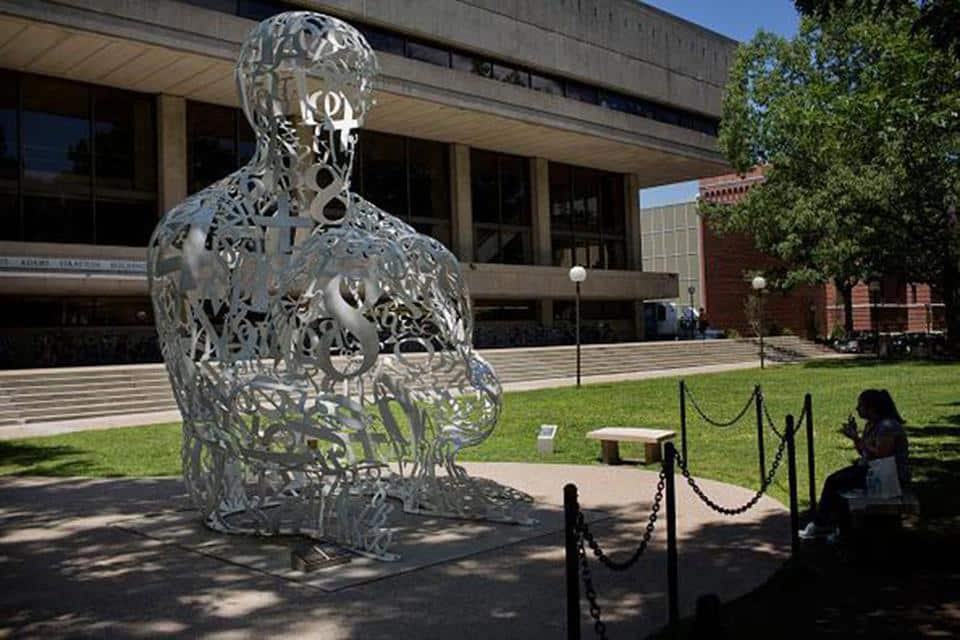 Visiting this place is a very pleasant experience, it is located right in front of the main entrance of MIT (Massachusetts Institute of Technology).  The statue recreates the shape of a human being formed by numbers and is made of steel, represents a man thinking and was built by the Spanish artist Jaume Plensa. At night the sculpture lights up and seems to become a night watchman. It’s certainly a very nice work to photograph. 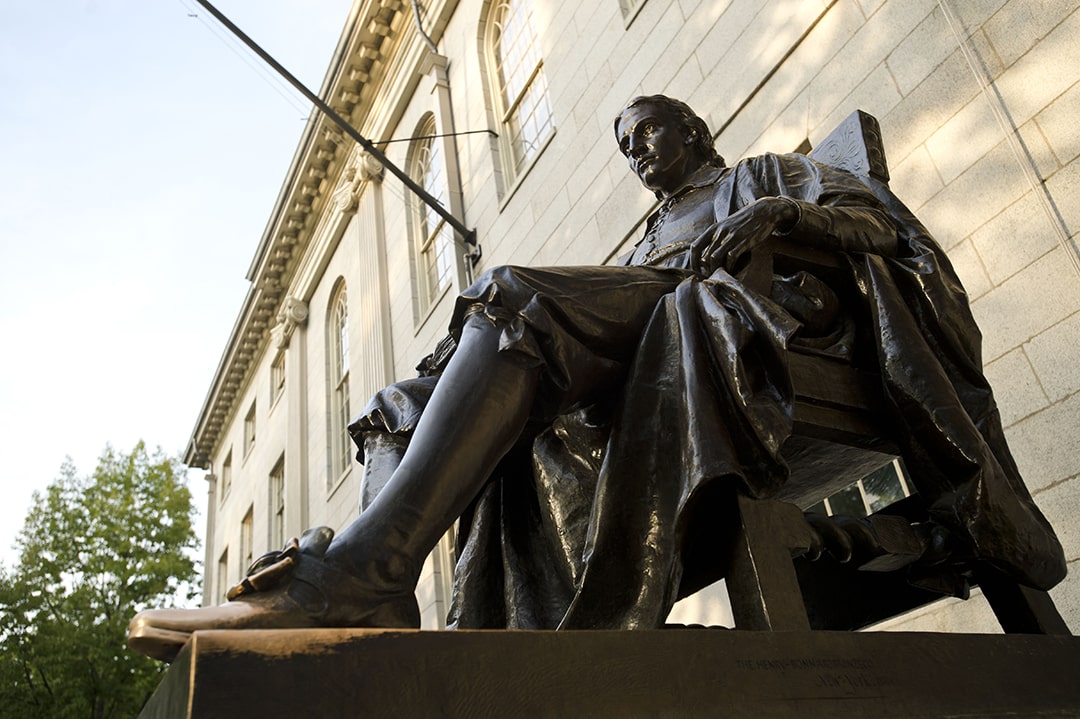 On the campus of Harvard University is the John Harvard Statue, one of the most visited statues in Boston. Sometimes people line up to have their picture taken with this beautiful monument, which pays tribute to one of the founders of the prestigious Harvard University. Around the figure there are many myths, one of them is that if you touch his left shoe before an exam you will do well.

The monument was made in 1884 by the sculptor Daniel Chester French and as a curious fact the sculpture is also known as “the statue of the three lies”. 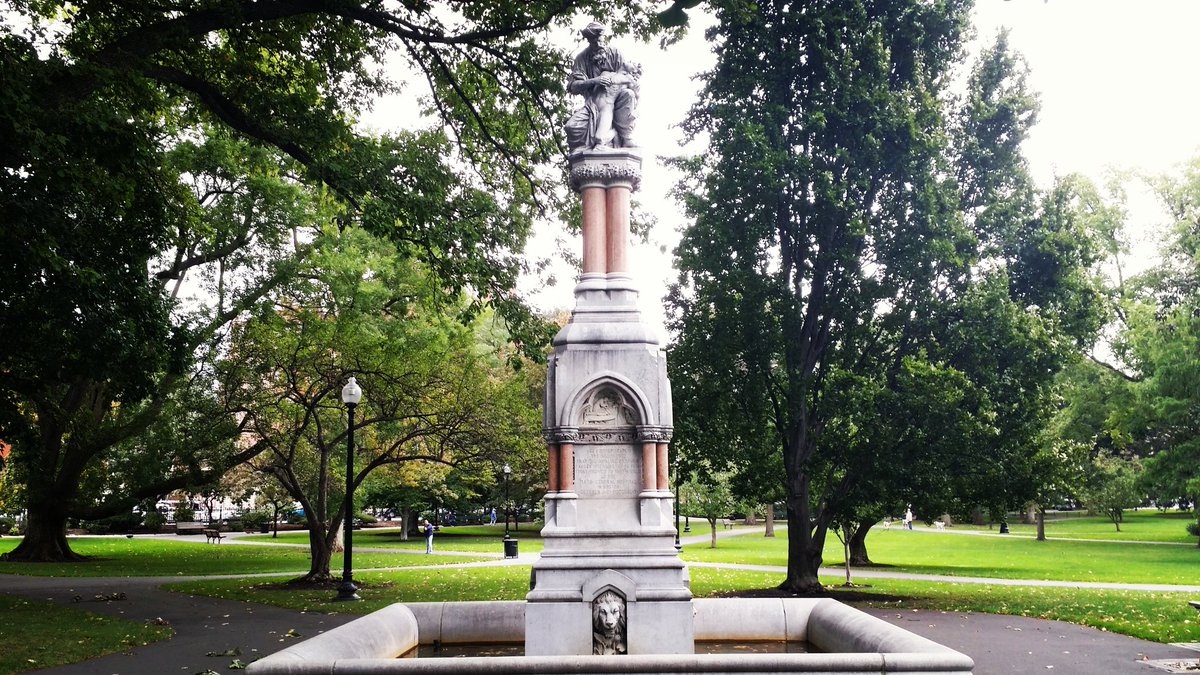 The Ether Monument is the oldest monument in the Boston Public Garden and is also known as the statue of the Good Samaritan. The sculpture is over 40 feet high, was built by John Quincy Adams Wards in 1868 and commemorates the discovery of the ether to be used as an anesthetic.  The monument is quite interesting and attractive, it is a statue to look at carefully because it has several details that will amaze you. It is located just in the northwest corner of the park near Arlington Street.