One of New York’s newest attractions is a super island that floats on the Hudson River, this new city park is known as Little Island. This megaproject that is located on 55 Hudson Greenway, just off the coast of the Chelsea neighborhood, is one of the new proposals the Big Apple has to renovate the city.

The design of this new floating park is spectacular. Millions of dollars have been invested in the project to create this natural space for the city, with the motive of being an attraction for locals and tourists who are looking for new things in New York. In 2021 it is planned to inaugurate Little Island, the works have advanced rapidly, a project that has become a pride for the city. 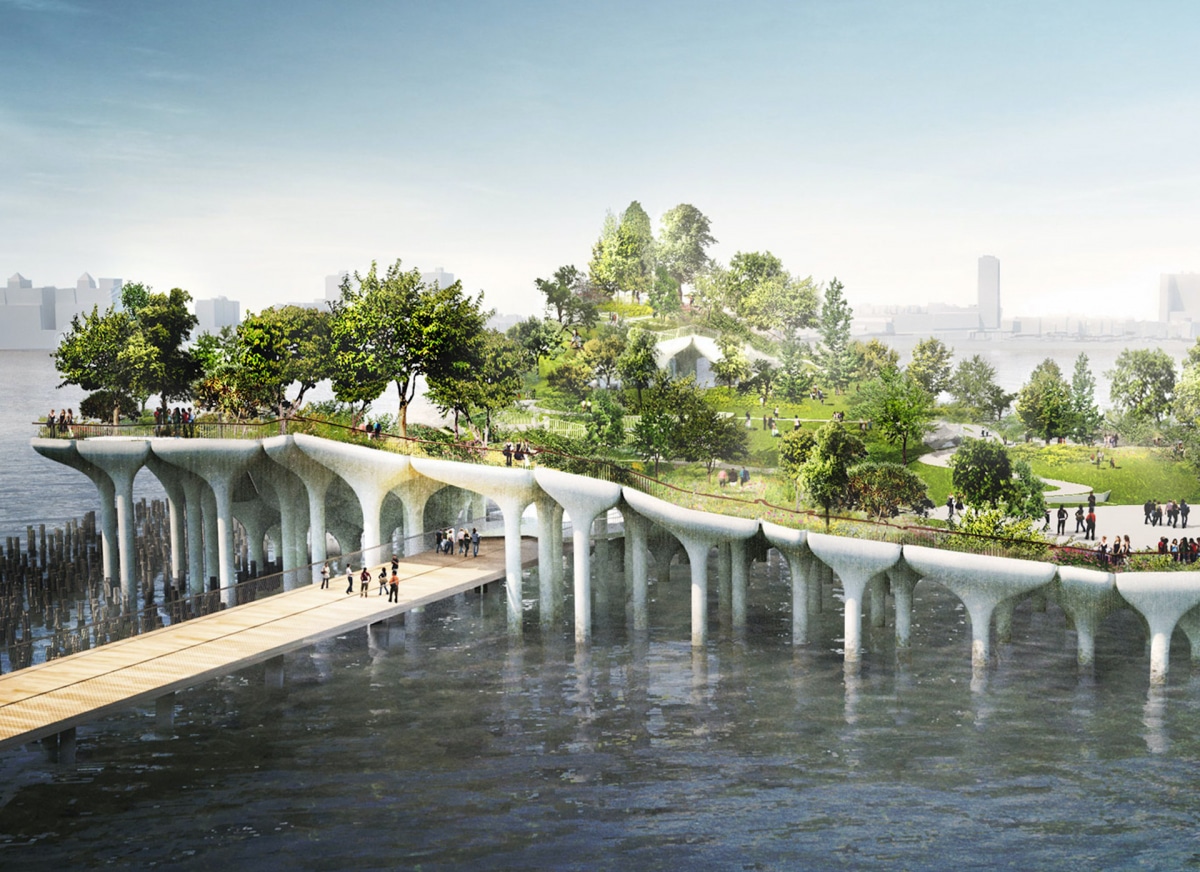 One of the main collaborators of this great project is the multimillionaire Barry Diller, he and his wife have been funding much of the park. Great news is that the park is designed for people to access easily, as they have announced that most tickets to events will be free, or cost less than $30, so that everyone who is in New York can enjoy Little Island.

Another great contribution of Little Island is the vegetation that will give the city, it has been announced that the island will have a wide variety of trees, more than 100 spices, in addition to offering the city a natural space with clean air, also offer a space free of noise, is an oasis in New York, a park with nature trails, an innovative proposal for one of the most visited cities in the world. The park can be accessed through elevated walkways, which are located on streets 13 and 14 of the Chelsea neighborhood.

The spring of 2021 is the planned opening date of Little Island, the designers and creators of this megaproject are the same architects who created the impressive The Vessel in Hudson Yards, the architectural firm Heatherwick Studio.

But how is it possible that this park floats on the Hudson River? The design, created by the famous architect Thomas Heatherwick, uses the old concrete columns that were before in the port to support the structure, an idea that takes advantage of the resources that already existed in the city, in total there are 132 columns that serve as a base to support Little Island.

The pillars in the old pier, formerly known as Pier 55, today support the island, the 132 columns are located in a special way that helps balance, distribute and support the weight of Little Island, thus, the old pier has served for the development of the new project. 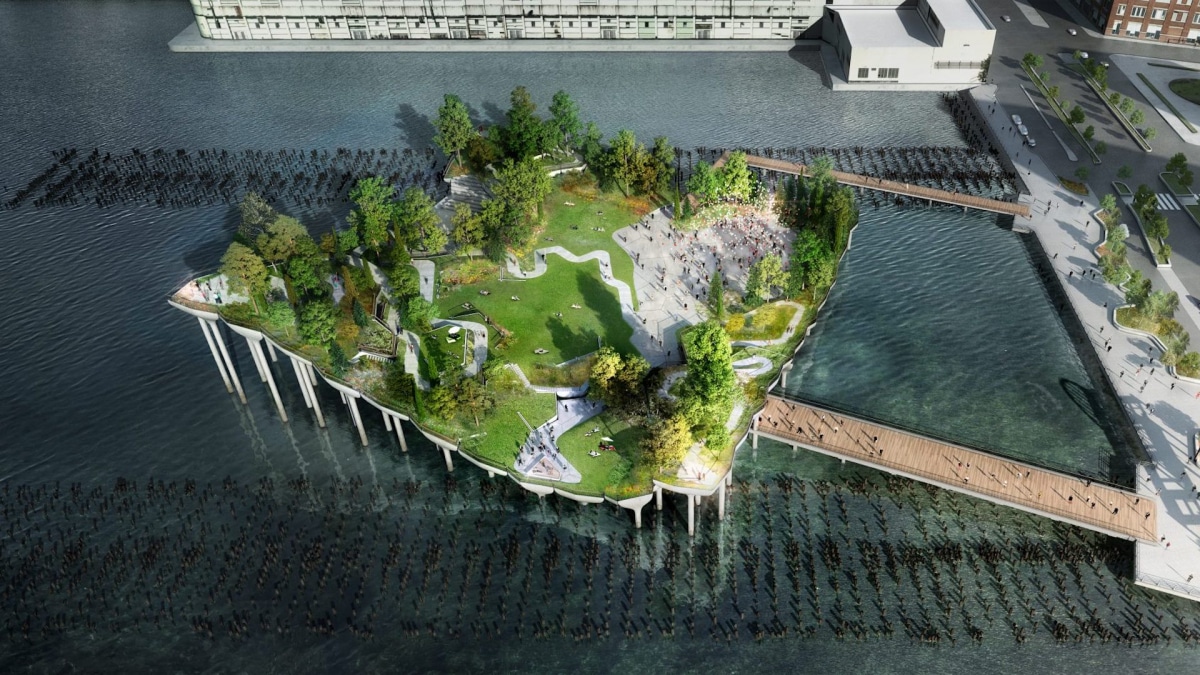 Something quite interesting is that all the pillars of the pier have a different height, which creates a wavy figure that helps sustain the island, also creates a landscape that looks like a leaf floating on the water, something impressive.

The park will be connected to the city through a bridge, a large part of Little Island will be covered with grass. Another major attraction of Little Island, in addition to the vegetation, will be its hills and a network of trails that will offer great views of Manhattan’s skyline, as well as 360-degree views of New York.

Although the project has had some problems that have caused delays, the construction of the island does not stop, since it was presented in 2013 this project has not stopped moving forward. 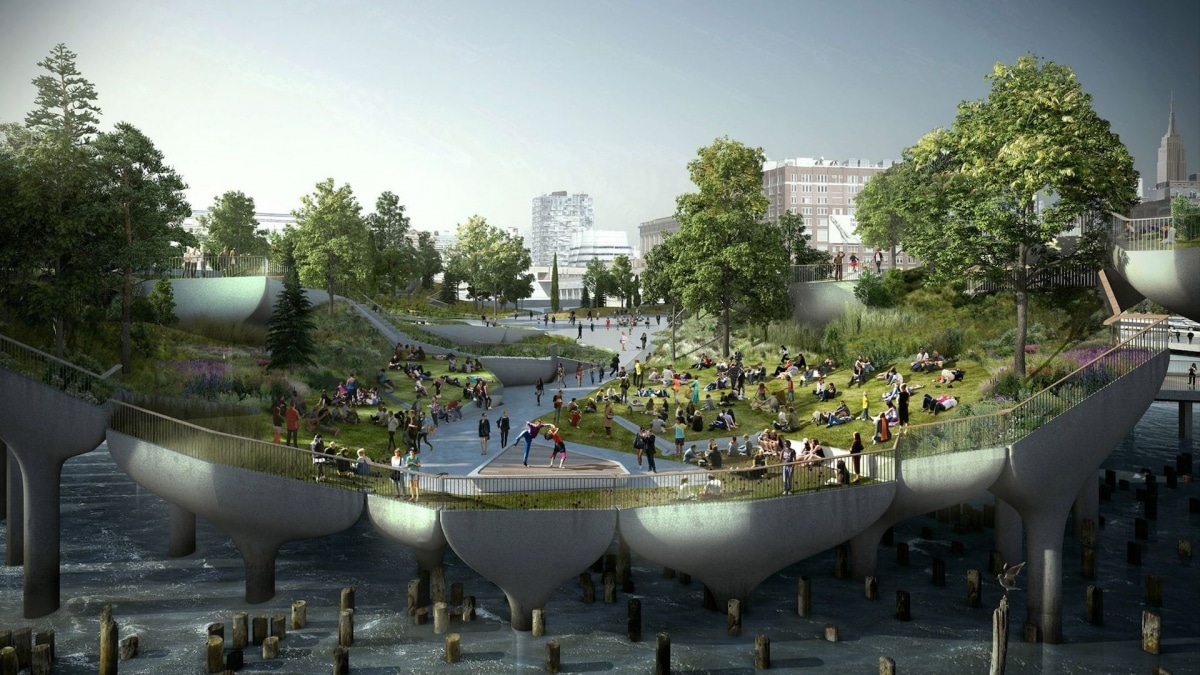 Little Island will be New York’s new urban oasis, a place loved by New Yorkers and tourists from all over the world, a space where skyscrapers are left behind, a wonderful park to feel nature, rest, escape the hustle and bustle and see New York from a privileged point.

This park is part of the new mega-works being carried out in New York, Little Island will be the new island of the city, thus the Big Apple is at the forefront and offers new options for people to have fun in the city.

Without a doubt this will be one of the best attractions in New York, an island that will give the city a lot of life, a place to meet, walk and enjoy the fresh air. In addition, it will become a great cultural complex where people will be able to appreciate great plays, enjoy outdoor and outdoor concerts, among many other things.