To visit Grand Central Terminal is to travel back to the past, it is a majestic place, its long windows, imposing decoration and passengers going from side to side, will make you feel like you are in another era. All you must do is stand under its beautiful roof and you will discover a starry sky, where you will find the 12 zodiacal constellations. Grand Central Terminal is an amazing place worth visiting.

A bit of history…

The history of this magnificent place began in 1871 with the name Grand Central Depot, built by tycoon Cornelius Vanderbilt. The station was a structure of three towers that represented the railroads of Hudson, New Heaven, and Harlem, each with its waiting room, the rise of this massive transport system caused an increase in the number of passengers and pollution, bringing as a consequence that steam locomotives were banned in the city. 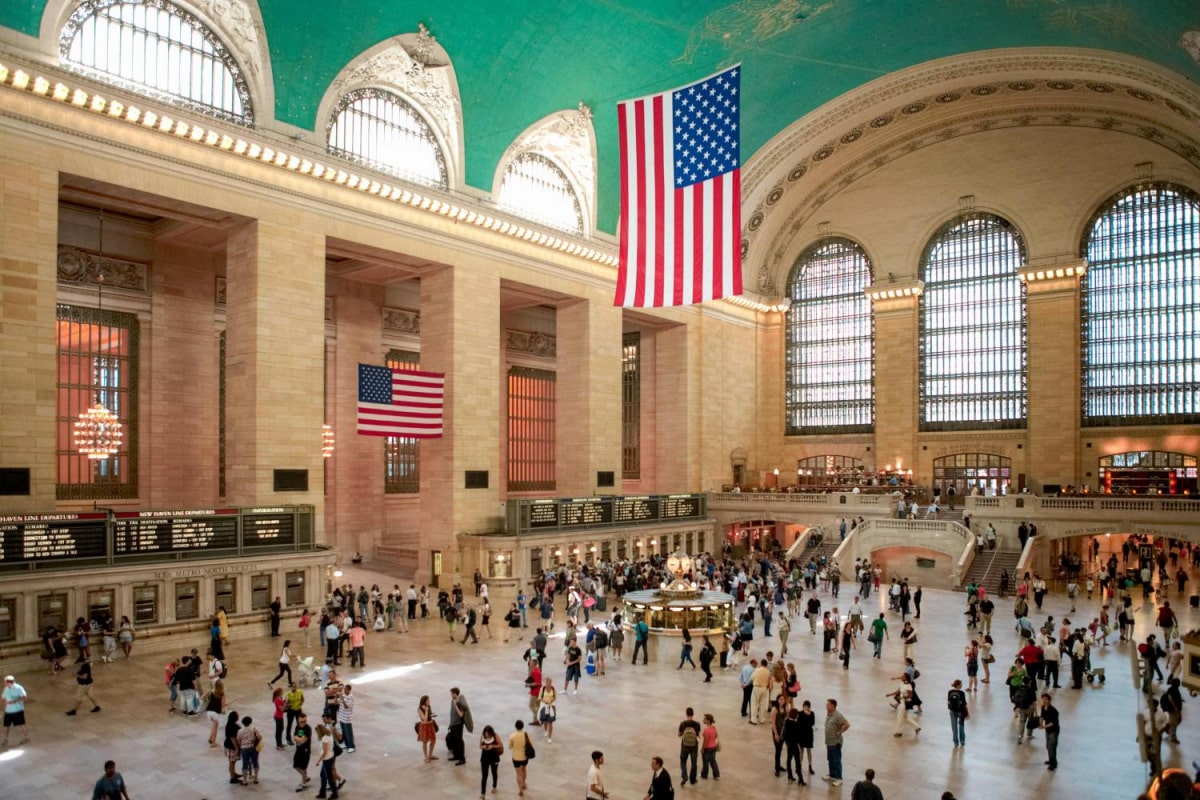 Seeking to improve the conditions of the station, in 1900 was born the Grand Central Station, a large building of glass and metal, considered as one of the architectural milestones of the 19th century. However, after the collision of two trains and death of several passengers, and with the need for a more efficient and modern station, gave way to electric trains and the construction of the terminal we know today.

Years later, the station was on the verge of being demolished, in 1978 thanks to a group of advocates, led by Jackie Kennedy, who opposed Penn Central Transportation¸ company that wanted to build a skyscraper on the terminal, managed to declare it as architectural heritage.

Where Grand Central Terminal is located:

The station is located at 42nd Street and Park Avenue on the Midtown side of Manhattan. In addition to being home to an impressive transportation system, it is also home to 5 exquisite and exclusive restaurants, 35 food stalls, the Grand Central Market and more than 60 retail stores. 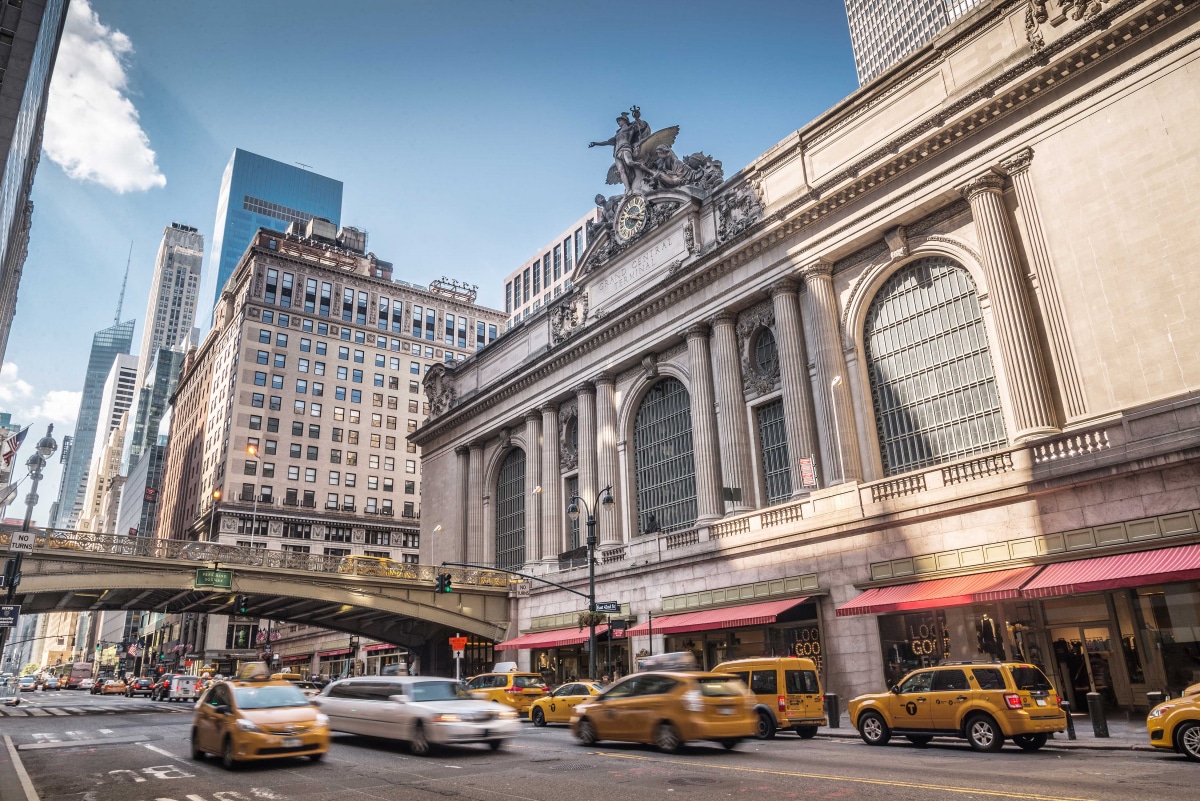 This magnificent place has an incredible history, if you look at the station in detail from the outside, you can see the amazing clock with crystals of the brand Tiffany, which is accompanied by sculptures of Greek gods representing the virtues of the railroad:

The Grand Central Terminal clock marks the exact time and the clocks located inside the station are one minute ahead of time for unsuspecting travelers to catch the train.

Once inside the station you will be able to see the most outstanding object of the whole station, the Main Concourse, a beautiful four-sided clock, also manufactured by Tiffany. There you will find the information booth that answers the more than 1000 questions that visitors ask each day and where you can ask about the thousands of trips that are made daily.

If you want to know more wonderful facts about the Grand Central Terminal, here below we share a list of curious facts that will make this place become one of your favorite destinations in New York.

The Vanderbilt family financed the construction of Grand Central Terminal.

On track 61 of the station, there is an abandoned underground road that is used as a secret road. After the construction of the Waldorf Astoria Hotel, several prominent people, such as presidents or celebrities, used this passageway to enter or leave the city.

The station has a secret room, the M42, which is responsible for supplying all the electricity to the Grand Central. There is a rumor that, in World War II, Hitler sent several German soldiers to sabotage it, but they failed because the room is guarded by guards who shoot any intruder. 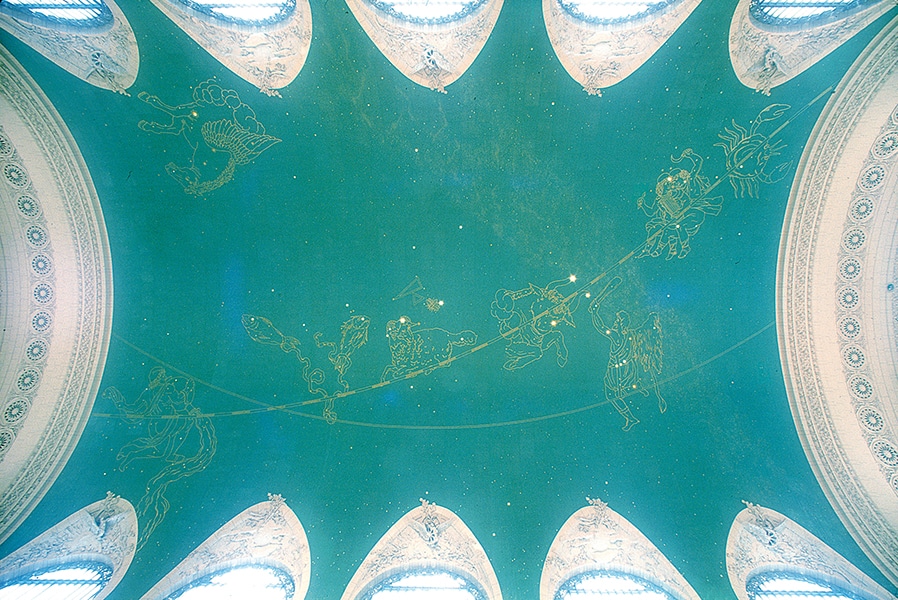 Grand Central Terminal has tennis courts, you only must go to the Vanderbilt Tennis Club to get to know them. Tennis players such as sisters Williams and John McEnroe have played here.

In the last restoration of the power plant in 1996, they returned its original color to the ceiling, as it had acquired a black tone due to the large number of passengers who smoked on this site.

The zodiac constellations on the ceiling are painted upside down to allude to God’s gaze, however, it is believed that this was only an excuse not to claim that they were painted badly.

In the arches, ceilings, chandeliers that are in various parts of the terminal, you will see oak leaves and acorns painted in gold; these represent the famous motto of the Vanderbilt family, From small acorns grow large oaks.

Oyster Bar is the station’s oldest and most famous restaurant. It was inaugurated in 1913, once there you will be able to delight yourself with its more than 25 different kinds of fish and 30 varieties of oysters.

The Gallery of Whispers is one of the iconic places of the station. When you stand in a corner and whisper to the wall, the sound will be heard from the other side, this effect is created by the acoustics of the station.